"MatchingAgendas, the Simple Art of Caring!" is episode 004 of my Bucket List project “100 Things I Want to Share Before I Die”

Four simple questions, effectively answered, can quickly and easily improve the quality of our relationships @home, @work and @play.

I designed the first iteration of MatchingAgendas in the 1980’s while serving as a community activist helping communities to rebuild their lives after being forcibly resettled by the apartheid government in South Africa.

Since then I have used the principles to great effect as a parent, as an employer and as a community activist in some of South Africa’s poorest and wealthiest communities.

First, the story of the pool lights.

A few years ago I was having dinner with a couple who wanted to conserve electricity; South Africa being in the grip of major power shortages. We were sitting on the verandah overlooking their attractive garden and swimming pool. As darkness descended the husband wanted to light up the pool but, the wife being keen to save power, was reluctant to turn the pool lights on. Although a trifling matter (a few cents worth of electricity), the question of the pool lights quickly escalated into a fairly heated, completely unnecessary, argument.

They both knew what they wanted but they were not considering

As an accomplished problem-solver, I was quickly able to spot a simple solution to their problem, no rocket science required. After listening for a short while and, with no end to the argument in sight, I interrupted their argument. Then having gained their attention, I suggested that they turn off the kitchen lights and turn on the pool lights. Simple. Action was taken and peace restored.

Why couldn’t the couple see such a simple solution and avoid the argument?

The answer lies in the hard-wiring of our caveman brain which evolved to protect us from threats; this hard-wiring is called “Negativity Bias”. In a nutshell, our untrained brain tends to focus on the problem rather than the solution and "fight, flight or freeze" are the typical reactions. This couple chose to fight.

In order to overcome “Negativity Bias”, we need to train our modern brain to feel more secure because, in large part, we have tamed our natural environment and the closest lions or tigers are (sadly) at the zoo.

Second, a story of a small community.

Seeking a high degree of security for my family home, I once purchased a house in an area with one through-road and a few cul-de-sac offshoots; there were about eighty houses within this enclave.

After ascertaining that there were no existing community initiatives in the area, I decide to take action. I dropped a letter into each letterbox inviting the residents to a cheese and wine evening to meet the neighbours and discuss ways to improve our area.

In my opinion there were three problems worth solving;

1. A small park that the city council neglected to maintain.
2. Messy street verges that spoiled the attractiveness of the area.
3. Two vacant properties that were so overgrown they were virtual jungles.

I was also interested to learn what other topics my neighbours would raise; I was, after all, the 'new kid' on the block.

If we could effectively address our concerns, we would significantly improve the quality of life in the area and the value of our properties. Both good incentives to explore possibilities.

More than fifty of the eighty properties in the area were represented at that first meeting and we got off to a great start with some positive action.

As expected, the quality of life in the area improved and the value of our properties increased significantly.

Although I left the area almost fifteen years ago, I often run into my old neighbours when visiting the local shopping centre; there is always time to enjoy a quick chat.

By making a small effort to reach out to neighbours combined with a willingness to cooperate, a great deal can be accomplished.

We didn't need all the residents to participate or contribute to these initiatives; we simple worked with the willing. And if some neighbours would "reap without sowing" was no concern; the value we gained by contributing to the improvement was ample reward.

It never ceases to amaze me how often people neglect to seek common ground.

That is such a pity because the rewards for ‘matching agendas’ within a family, a work environment or community, are almost always far greater than the effort required to get onto the same page.

All it takes is little skill and practice.

Although the four questions may be simple, arriving at the best answers requires some skill and practice to rewire our brain for modern living; the art of caring!

Join my next free webinar at 18.30 (GMT +2) on Wednesday evening to learn more about MatchingAgendas and find out how to apply these principles in your life and relationships. Check out my new webinar on TOP. 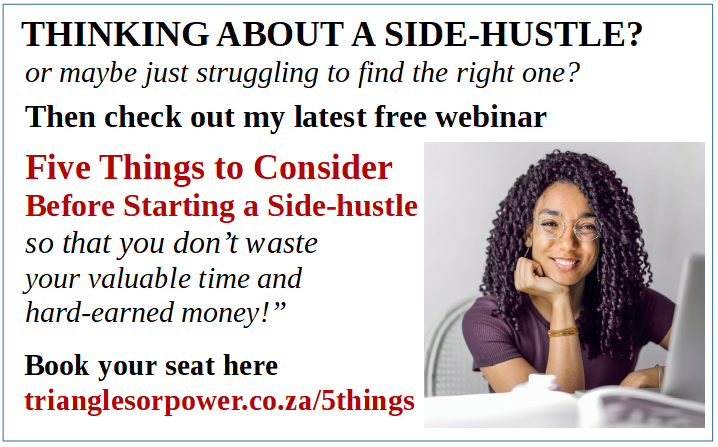